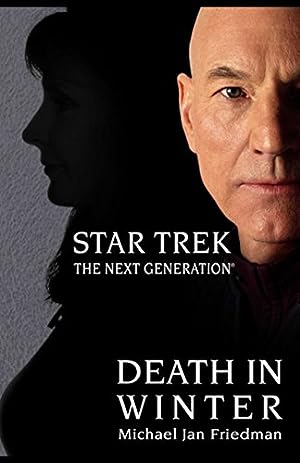 Star Trek: The Next Generation: Death in Winter

Long before Captain Jean-Luc Picard took command of the legendary Starship Enterprise, he fell deeply and hopelessly in love with Doctor Beverly Crusher. Though, for one reason or another, Picard never acted on his feelings, he found a measure of contentment as Beverly's close friend, colleague, and daily breakfast partner.
But when Doctor Crusher leaves her position on the Enterprise to become the chief medical officer of Starfleet, the brightest light in Picard's life is taken from him. And he has hardly resigned himself to his loss when he learns that Beverly has been declared missing in action on a distant planet -- and presumed dead.
Kevratas is a bleak, frozen world on the far side of the Romulan Neutral Zone where the Federation has become the plague-ravaged natives' only real hope of survival and freedom. Starfleet has no recourse but to send in another team to try to save the Kevrata -- and Picard is the natural choice. Critical to the success of his mission are two colleagues who served under him when he commanded the Starship Stargazer -- Pug Joseph, a man with a past to live down, and Doctor Carter Greyhorse, who has served time for attempted murder -- as well as a Romulan who left his people years earlier and never expected to return. Together, they follow the trail of Beverly Crusher to Kevratas, determined to succeed where the doctor failed.
On the Romulan homeworld, meanwhile, the political vacuum created by the demise of Praetor Shinzon has been filled by his staunchest supporter, Senator Tal'aura. But there are those who oppose her, including Commander Donatra and the warbird fleets under her command, because of the way Tal'aura has mishandled rebellions on the Empire's subject worlds.
And one rebellion in particular; the movement for self-determination on frigid Kevratas.
So begins a desperate struggle -- not only for the freedom of the long-oppressed Kevrata but also for the soul of the Romulan Empire. Before it's over, destinies will be forged and shattered, the Empire will be shaken to its ancient foundations, and Jean-Luc Picard's life will be changed... forever.

Track It. This book may eventually drop below $9.99.

Log In to track Michael Jan Friedman on eReaderIQ.

We last verified the price of this book about one year ago. At that time, the price was $18.99. This price is subject to change. The price displayed on the Amazon.ca website at the time of purchase is the price you will pay for this book. Please confirm the price before making any purchases.