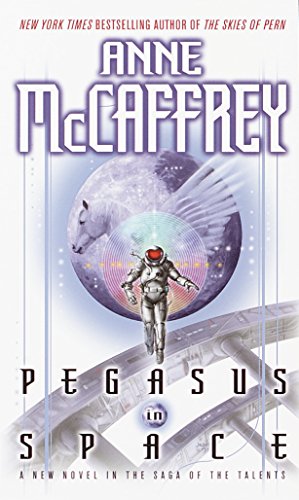 In a triumphant career spanning more than thirty years, Anne McCaffrey has won the acclaim of critics, the devotion of millions of fans, and awards too numerous to mention. Her bestselling Dragonriders of Pern® series is counted among the masterpieces of modern science fiction, a work whose popularity continues to grow as new generations of readers discover the literary magic only Anne McCaffrey can provide. Now that magic is back, displayed as breathtakingly as ever in the exciting and long-awaited addition to McCaffrey's classic Pegasus series -- and the perfect link to her bestselling Tower and Hive saga...
PEGASUS IN SPACE

For an overpopulated Earth whose resources are strained to the breaking point, there is only one place to look for relief: straight up. With the successful completion of the Padrugoi Space Station, humanity has at last achieved its first large-scale permanent presence in space. Additional bases are feverishly being built on the Moon and on Mars, stepping stones to the greatest adventure in all history: the colonization of alien worlds. Already long-range telescopes have identified a number of habitable planets orbiting the stars of distant galaxies. Now it's just a question of getting there.

But there are those who, for selfish motives of their own, want Padrugoi and the other outposts to fail. People who will stop at nothing to maintain their power or to revenge its loss. Standing in their way are the Talented, men and women gifted with extraordinary mental powers that have made them as feared as they are respected -- and utterly indispensable to the colonization effort.

There is Peter Reidinger, a teenage paraplegic who happens to be the strongest telekinetic ever, his mind capable of teleporting objects and people thousands of miles in the blink of an eye. Yet all his power cannot repair his damaged spine or allow him to feel the gentle touch of a loved one... Rhyssa Owen, the powerful telepath and mother hen to Peter and the rest of her "children" -- and a fierce, unrelenting fighter against the prejudice that would deny the Talented the right to lead happy and productive lives... and Amariyah, an orphan girl who loves two things in the world above all others: gardening and Peter Reidinger. And woe to anyone who harms either one of them -- for the young girl's talent may prove to be the most amazing of all.

We last verified the price of this book about 2 years ago. At that time, the price was $8.99. This price is subject to change. The price displayed on the Amazon.ca website at the time of purchase is the price you will pay for this book. Please confirm the price before making any purchases.