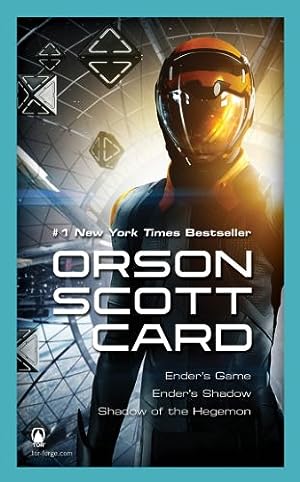 Orson Scott Card's classic and worldwide bestselling series is the winner of the Hugo and Nebula awards!

Ender's Game opens in the last desperate days of Earth's war against the implacable insectoid aliens. In order to develop a secure defense against a hostile alien race's next attack, government agencies breed child geniuses and train them as soldiers.
Ender Wiggin. Brilliant. Ruthless. Cunning. A tactical and strategic master. And a child.

Ender's Shadow tells the parellel story of Bean. Bean's desperate struggle to live, and his success, brought him to the attention of the Battle School's recruiters, those people scouring the planet for leaders, tacticians, and generals to save Earth from the threat of alien invasion. Bean was sent into orbit, to the Battle School. And there he met Ender...

Shadows of Hegemon takes us to the period after the War is over, won by Ender Wiggin and his team of brilliant child-warriors. The enemy is destroyed, the human race is saved. Ender himself refuses to return to the planet, but his crew has gone home to their families, scattered across the globe. The battle school is no more.

We last verified the price of this book about one year ago. At that time, the price was $20.99. This price is subject to change. The price displayed on the Amazon.ca website at the time of purchase is the price you will pay for this book. Please confirm the price before making any purchases.