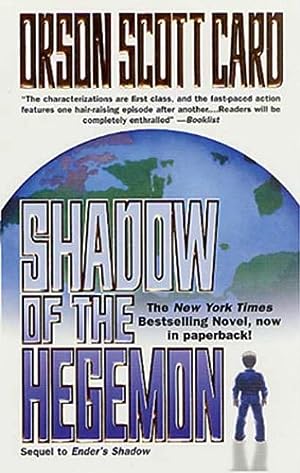 Shadow of the Hegemon (The Shadow Saga Book 2)

The War is over, won by Ender Wiggin and his team of brilliant child-warriors. The enemy is destroyed, the human race is saved. Ender himself refuses to return to the planet, but his crew has gone home to their families, scattered across the globe. The battle school is no more.

But with the external threat gone, the Earth has become a battlefield once more. The children of the Battle School are more than heroes; they are potential weapons that can bring power to the countries that control them. One by one, all of Ender's Dragon Army are kidnapped. Only Bean escapes; and he turns for help to Ender's brother Peter.

Peter Wiggin, Ender's older brother, has already been manipulating the politics of Earth from behind the scenes. With Bean's help, he will eventually rule the world.

Shadow of the Hegemon is the second novel in Orson Scott Card's Shadow Series.

Children of the Fleet

The Second Formic War (with Aaron Johnston)
The Swarm /The Hive

We last verified the price of this book about one year ago. At that time, the price was $8.99. This price is subject to change. The price displayed on the Amazon.ca website at the time of purchase is the price you will pay for this book. Please confirm the price before making any purchases.