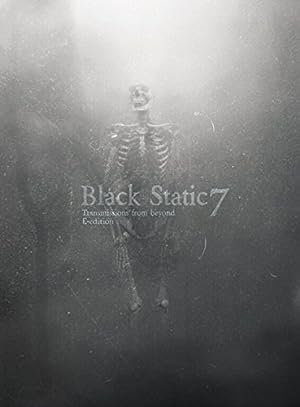 This back issue of Black Static #7, from Oct 2008, began the magazine's second year of publication. Alison J Littlewood's first TTA story 'The Deep Walker' appeared in this issue and she went on from there with stories in issues16, 22 & 25 plus another in 'Crimewave 11: Ghosts'. In 2011 Alison (who has now dropped the 'J') had a 3 novel contract with Jo Fletcher Books and her first 'A Cold Season' was out in Jan 2012. She followed that up with 'Path of Needles' May 2013 and 'The Unquiet House', April 2014. This year (2015) her 4th novel 'A Cold Silence', a sequel to her first, is due in September and her fifth, a novel in the Zombie Apocalypse! series, 'Acapulcalypse Now' is due a month later in October.
2015 is also the year in which Alison is a double Shirley Jackson Award nominee: in the novel and short fiction lists
This issue also includes Trent Hergenrader's 'The Hodag' which was selected by editor Ellen Datlow's for her 'The Best Horror of the Year: Volume One' in 2009. Eric Gregory's 'Blood God Blood' received an honorable mention in that same collection. You will also find stories from Bruce Holland Rogers, Daniel Kaysen, Tony Richards and David Sakmyster.
Black Static is essentially a fiction magazine containing short stories in the horror and dark fantasy genres. But its non-fiction covers other aspects of the genre via comment columns, reviews of books, movies, DVDs and TV.

Peter Tennant's non fiction features Tim Lebbon, with reviews of 3 of his books, and editor Don D'Auria (of the now defunct) Leisure Books and reviews of 6 of his then recent novels along with 4 more book reviews including Thomas Ligotti's 'Teatro Grottesco'. Tony Lee reviews 27 DVD/Blu-ray releases. Stephen Volk looks at censorship by book burning and more subtle means. Christopher Fowler considers the joys of the unfashionable in the aftermath of the murder of Sophie Lancaster. Mike O'Driscoll ponders reports of the death of SF, linking it to the rise of small and independent publishers specializing in SF. And there's plenty of magnificent art by David Gentry.
At time of posting Black Static's next issue is #47, July 2015, and should feature Razorshins by John Connolly.

The issue's artist is David Gentry

None. We do not have enough historical data to make any recommendations.

Log In to track Andy Cox Editor on eReaderIQ.

Log In to track Bruce Holland Rogers on eReaderIQ.

We last verified the price of this book about one year ago. At that time, the price was $7.05. This price is subject to change. The price displayed on the Amazon.ca website at the time of purchase is the price you will pay for this book. Please confirm the price before making any purchases.