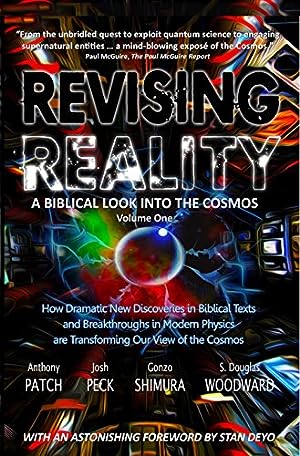 Revising Reality: A Biblical Look into the Cosmos

"From the unbridled quest to exploit quantum science to engaging supernatural entities... a mind-blowing exposé of the Cosmos." Paul McGuire, The Paul McGuire Report

Four breakout Christian apologists, no strangers to "fringe" topics, take a radical look at Cosmology based on new discoveries in physics and unconventional insights into the Bible. Each is noted for his willingness to tackle the challenges of secular skepticism and examine the intersections between modern science and the Bible. You will embark on an astounding adventure exploring the Cosmos with awakened eyes, guided by their unrestrained research as well as remarkable and unprecedented conclusions.

In Volume One of a two-volume study, the controversies of angelic incursions in humanity's history and their impact on the human genome are considered. Also discussed: the nature of evil and the role that fallen angels and heavenly archons have played in the story of the Bible as well as rethinking Christology and the meaning of the Logos, contrasting with Gnostic and occult concepts of the demiurge. Here the authors demonstrate startling parallels to our day:

* Dangers of CERN's Large Hadron Collider (LHC), the occult agenda behind humanity's most powerful machine, and its link to the Tower of Babel;

* Opening dimensional portals and its unknown effects, including awakening the creatures of the Abyss, and a possible connection to the planet Saturn;

* Man-machine hybrids empowered by the Internet and threats presented to humankind from unrestrained advances in transhumanist research;

* Challenges to Einstein's standard model by the revolutionary concepts of the Electric Universe proposed by scientists at the Thunderbolts Project;

* Theories about cosmic wars and the "real" star wars of ancient times.

About the authors: Anthony Patch is a leading authority on CERN and author of two novels focused on the mysteries of quantum computing; Josh Peck is author of multiple books and host for Into the Multiverse on SkyWatch TV; Gonzo Shimura is an award-winning filmmaker and host of the Face-Like-the-Sun YouTube channel; and S. Douglas Woodward, author of over a dozen books, appears often on television and radio. Woodward it the editor of this volume.

Get It This book is at its lowest price within the past year.

Log In to track S. Douglas Woodward on eReaderIQ.

We last verified the price of this book about 2 years ago. At that time, the price was $9.59. This price is subject to change. The price displayed on the Amazon.ca website at the time of purchase is the price you will pay for this book. Please confirm the price before making any purchases.