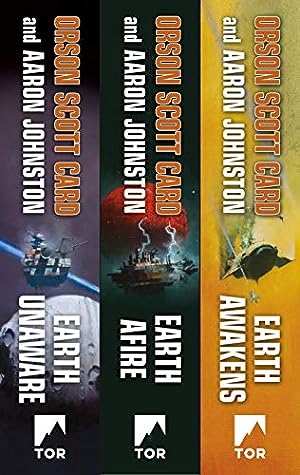 Ender's Game opens in the last desperate days of Earth's war against the implacable insectoid aliens. We are told early on that the Battle School is training generals for the Third Formic War -- the war that will end the war; will save the Earth; will finally defeat the Buggers. This is the story of the First Formic Wars, back when humans thought they were alone in the galaxy. Humanity was slowly making their way out from Earth to the planets and asteroids of the Solar System, exploring and mining and founding colonies. Then a ship's telescopes pick up a fast-moving object coming in-system, it's hard to know what to make of it. It's massive and moving at a significant fraction of the speed of light.

Earth Unaware -- When mining ship El Cavador's telescopes pick up a fast-moving object coming in-system, it's hard to know what to make of it. It's massive and moving at a significant fraction of the speed of light. But the ship has other problems. Their systems are old and failing. Worrying about a distant object that might or might not be an alien ship seems... not important.

Earth Afire -- Victor Delgado beat the alien ship to Earth, but not soon enough to convince skeptical governments that there was a threat. That is, until space stations and ships and colonies went up in sudden flame. And when that happened, only Mazer Rackham and the Mobile Operations Police could organize in time to meet the threat.

Earth Awakens -- Politics slowed the response on Earth, and on Luna, corporate power struggles seemed more urgent than distant deaths. It's up to Mazer Rackham's squad in China, who have developed a method to destroy the alien landers one by one; and Lem Jukes and his crew on the Moon, who may have the key to destroying the Formic mother ship in orbit.

We last verified the price of this book about 2 years ago. At that time, the price was $21.99. This price is subject to change. The price displayed on the Amazon.ca website at the time of purchase is the price you will pay for this book. Please confirm the price before making any purchases.