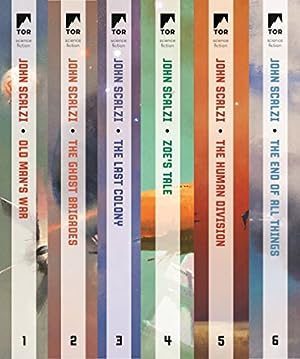 This discounted ebundle includes: Old Man's War, The Ghost Brigades, The Last Colony, Zoe's Tale, The Human Division, The End of All Things

New York Times bestselling author John Scalzi takes you on an epic romp of galactic conquest and exploration, with some laughs along the way.

Earth itself is a backwater. The bulk of humanity's resources are in the hands of the Colonial Defense Force, which shields the home planet from too much knowledge of the situation. What's known to everybody is that when you reach retirement age, you can join the CDF. They don't want young people; they want people who carry the knowledge and skills of decades of living. You'll be taken off Earth and never allowed to return. You'll serve your time at the front. And if you survive, you'll be given a generous homestead stake of your own, on one of our hard-won colony planets.

Old Man's War -- John Perry did two things on his 75th birthday. First he visited his wife's grave. Then he joined the army, with only the vaguest idea what to expect. Because the actual fight is far more difficult than he can imagine -- and what he will become is far stranger.

The Ghost Brigades -- At first, Jared is a perfect soldier, but as another man's memories slowly surface, Jared begins to intuit the reasons for their betrayal. Time is running out: The alliance is preparing its offensive, and some of them plan worse things than humanity's mere military defeat.

The Last Colony -- Retired from his fighting days, John Perry and his wife, Jane, are pulled back into the political arena, and into the thick of interstellar politics, betrayal, and war.

Zoe's Tale -- Zoe Boutin Perry: A colonist stranded on a deadly pioneer world. Holy icon to a race of aliens. A player (and a pawn) in an interstellar chess match to save humanity, or to see it fall. Witness to history. Friend. Daughter. Human. Seventeen years old.

The Human Division -- The CU's secrets are known to all. Other alien races have come on the scene and formed a new alliance -- an alliance against the Colonial Union. And they've invited the people of Earth to join them. For a shaken and betrayed Earth, the choice isn't obvious or easy.

The End of All Things -- CDF Lieutenant Harry Wilson and the Colonial Union diplomats he works with race against the clock to discover who is behind attacks on the Union and on alien races, to seek peace with a suspicious, angry Earth, and keep humanity's union intact... or else risk oblivion, and extinction -- and the end of all things.

We last verified the price of this book about one year ago. At that time, the price was $44.99. This price is subject to change. The price displayed on the Amazon.ca website at the time of purchase is the price you will pay for this book. Please confirm the price before making any purchases.